Gentleman’s Choice Motorcycles offers a variety of motorcycles, motorcycle parts, and motorcycle memorabilia for sale.  I’m purely a motorcycle enthusiast with a passion for vintage and classic motorcycles.    While I’m attracted to the bikes I grew up on riding and racing in the 70s I’m more noted for my attachment to Indian motorcycles.

My recent accomplishments on Indians include my participation in the first organized group Cannonball run for Antique motorcycles by promoter Lonnie Isam Jr. in 2010.   The coast to coast run started at Kitty Hawk NC and ended on the Santa Monica Pier in California.  The ride was established for motorcycles 1915 and older.  I rode my 1915 Indian known as “War Eagle” and had the pleasure of riding with Cris Sommer Simmons, notably the most famous woman motorcycle rider living, who rode a  1915 Harley known as “Effie”.

In 2012 I participated in the 2nd event of its type – this time allowing up to 1929 motorcycles.  The event took a northern route traveling from New York to San Francisco.  My ‘27 Indian performed spectacularly.  My riding partners were two of my good buddies – Motorcycle Hall of Famer,  Buzz Kanter, editor and founder of American Iron Magazine as well as several other motorcycle publications  and Paul Ousey,   who has a premier collection of antique motorcycles and is the 4th generation operator of  OZ Trucking & Rigging – a high quality transport and rigging service specializing in Safe Moving, Safe Installation, and Safe Removal. 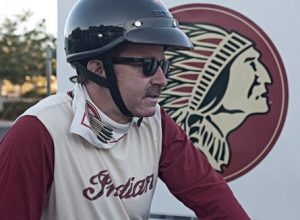 I rode my 1927 Indian Chief again in the third Motorcycle Cannonball  in 2014 as entry #55.  The route started in Daytona Beach, Florida and finished in Tacoma, Washington.  I pushed the Chief probably a bit too hard and expected too much from her doing two cross country rides.  We did a total rebuild of the engine on the road and I was able to ride enough to have a score high enough to be considered a finished ride.  Our team is one of a handful to have ridden all three Cannonballs and to have scored out of the DNF column.  I was an independent rider this time but spent a good bit of time riding with some dear friends such as Buzz Kanter, Pat and Cris Simmons, Scott and Sharon Jacobs, John Landstrom, Ryan Allen, Doug Jones as well as the Texans, Mike and Buck Carson.  It was another once in a lifetime opportunity that added 10 years of age to me but I collected 30 years of experience.